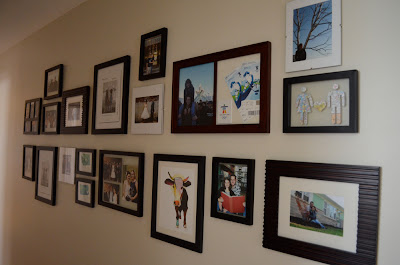 Ever since we bought our house in May, the hallway that leads from our main living space back to our bedrooms seemed so long and daunting. At over 13’ long we had a lot of wall space to deal with. We knew that one or two pictures weren’t going to cut it…they would get lost all on their own. When I stumbled across this picture on Pinterest I knew I wanted to recreate a similar look for our hallway:

I thought creating those two horizontal lines was going to be the trickiest part. Nothing in a 1950’s home is completely square and even. Everything is a little bit wonky – which adds charm and character but makes hanging pictures straight more difficult. Luckily Adam had a laser level that had been his grandfathers. 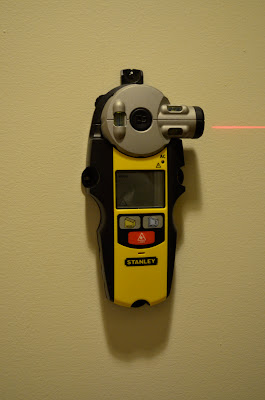 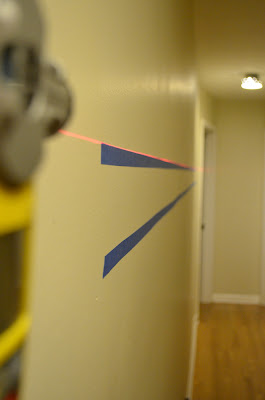 We started by figuring out where we wanted the tops of our bottom rows of pictures to be and where the bottoms of the top row of pictures should be. We decided to created a 5” horizontal void between the two rows. We put a small finishing nail in the wall and hung the laser level on it. Once level, we ran a line of blue painters tape along the laser line. We moved the nail up 5 inches, leveled it again, and ran a second line of blue painters tape across the wall. We figured that 2 small nail holes would be easy to patch – and I believe doing this method we avoided a lot of other “oops” nail holes along the way (trust me – there were still a few, but luckily they are being disguised by our newly hung pictures). 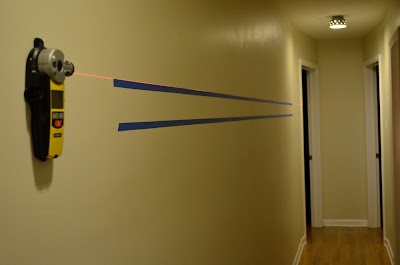 After we had the prep work done, we took our collection of picture frames and started laying them out on the family room floor. Having them all laid out the way we wanted them made it easy to pick up a frame, take it into the hallway and hang it in the correct order. Having a game plan of where each frame went saved us a lot of time and headache because 1) we knew exactly where all the frames were going before we started and 2) if we didn’t like the layout when they were on the ground, they were a lot easier to move around than opposed to moving them around after they had been nailed up on the wall. 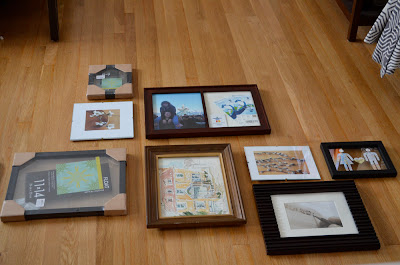 After we had the layout complete, we started with the middle picture frame and worked our way out.

As far as how we hung the pictures: we used the tried and true “measure twice ‘hammer’ once” method. If a frame was being hung on the bottom row, we would measure from the top of the frame down to the hanger. If that measurement was 1 ½” we would measure down from the top of our blue tape mark 1 ½” and sink our nail into the wall. After the 4th or 5th picture, we really had the method down. 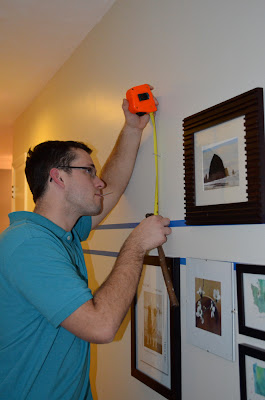 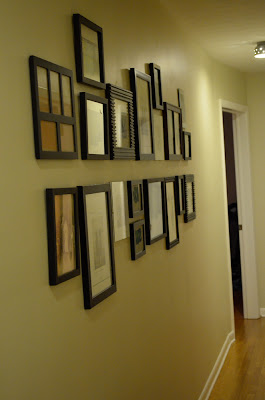 Hanging the pictures this way took a lot of patience, so we ended up hanging 4-5 pictures a night for a few nights in a row. I’m glad we took our time, because we think the results turned out great!


Here are a few of the pictures we hung: 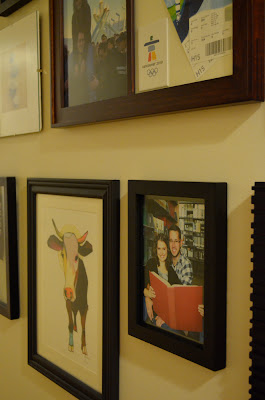 (top) This is a picture from our trip up to the 2009 Winter Olympics in Vancouver, BC.
and ticket stubs to a hockey game we saw while there.
(bottom left) This is a print from Etsy that I fell in love with –
don’t ask me why, but it’s my new favorite.
(bottom right) an engagement picture that my brother took in a library in my hometown. This is one of Adam’s Christmas gifts. It’s made of a map of Seattle (where I
moved from to be with him) and of York (where he grew up). The heart is of
downtown York, where we got married in October.

If you’re looking to do your own picture wall here is what I would suggest:

1)   Find your inspiration (whether it’s something from a magazine, the internet, or something you came up with on your own).

2)   Lay out your frames on the floor ahead of time. It’s nice to be able to see what the finished product is going to look like before you put a single hole in your wall.

3)   Hang pictures using the buddy system – it’s hard to hold a frame, a tape measure, a nail, a hammer, a level, and a pencil in your hands all at once J I held the frames and measured while Adam marked the spot, and nailed everything into the wall. Working as a team is fun.

4)   Fill your frames with pictures that mean a lot to you – and feel free to add in some random artwork (whether it’s homemade or purchased). Seeing the things and people you love everyday is wonderful.

5. Print your pictures AFTER you've hung your frames - that way you won't feel obligated to hang a frame in a certain orientation because of the picture that's inside. It gives you all the freedom to design your frames the way you think they look best on your walls.

created by Shannon Barefoot at 9:55 AM